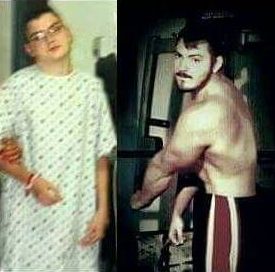 Brad Kelly was a boy who at an early age fell ill to a reoccurring chronic disease with no cure.  Here you can see Brad right before his first major surgery, weakened by nearly a decade of illness and scared to death of the procedure ahead.  However, it was his only hope at not developing esophageal cancer and a possible normal life so he pushed on.

Growing up every day was filled with sickness, he spent weeks at a time in children’s specialist hospitals around the world, and took high school in the hospital homebound program. But this early tragedy met its match with Brad’s determination to overcome his illness.

He accomplished this the first time by transforming himself from a frail 6’1 96 pound boy who couldn’t do 5 pushups to 220 pounds and doing feats of strength less than 500 men in history have ever accomplished such as ripping a deck of cards into eighths. He soon became highly regarded in the fitness industry by other professionals and was published in many books, magazines and websites  But fate struck again and the illness returned, driving him back into daily sickness and thus depression.

To overcome this reoccurring nightmare this time Brad did not try to train his body, but he chose to train his mind. He made it his sole purpose to find ways to create happiness and read over 70 books on the subject until eventually finding neuroscience. It was then he found his true calling and used that information to not only save himself but countless others and begin his journey to write his book “ The Science of Happiness“

Brad has also directly helped over 200 National Academy of Sports Medicine Trainers pass their own exams and performs online training to help people reach their fitness goals, whether it is gaining muscle, weight loss, or just leading a healthy lifestyle.  Truly understanding the value of a healthy body and mind, Brad is now fully recovered from a chronic sickness that lasted over 10 years and left him weighing 97 pounds.