In part one we discussed how fiber alignment makes changing angles of exercise a scientifically sound practice.  Score one  the bodybuilders of the  40s, 50s and 60s.

To build our case  further on  why variety is important we will look  how some muscles  origins  also allow  us to  use variety and key exercise selection  to our benefit.

You see the origin of a muscle is where it originates and the insertion is where it inserts back onto the manipulatable  bone, anchored by tendons.  A muscle pulls  to its origin,  and in addition each head  of the muscle has  different origins. If you look at the picture below  we can clearly see the triceps long head origin( The red one) is different than the other two in that it crosses the scapula. 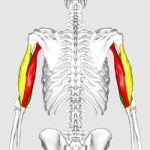 This is really a anatomical stroke of luck  because  by the Long Head crossing the shoulder joint it can aid in shoulder extension. Which in turn means   it is stretched during shoulder  flexion and can produce the greatest force in that position.  Alternatively when the arms are down by the sides it is entering a state of contraction so the Medial and Lateral heads do the most work as they  are in a more effective position.

Brad Schoenfeld uses an example of a slingshot to illustrate this point. If a muscle is in a stretched  position it  is able  produce more force, just  as  the farther you stretch a rubber band. But if the muscle or head  is already in a flexed ( or short) position it cannot produce force  as effectively.

Note- Shoulder Flexion is when you raise your arms in front of your body , such as during a barbell front raise.

What this means is that exercises that also include shoulder flexion( such as overhead raises) emphasize  the long head and movements that have the arms down by your side emphasize    the medial and lateral heads.

An example of  the muscle being placed into a flexed position can be  found   in advanced  calf training exercise selection.  The lower leg  has two muscles calf raises can  develop: the gastrocnemius and soleus which  operates off a one joint two joint principle. Between the two the gastrocnemius is the one that crosses two joints. This one is a bit different than the tricep  though, because the gastrocnemius aids in knee flexion, therefore  when you sit down it rendered inefficient because the knee is already  partly flexed.  Similar to how  the long head is when your arms are by your sides. Alternatively when you are standing  the gastrocnemius is lengthened and is more efficient. Therefore…

I hope that  further helps you in understanding  advanced exercise selection. Part three will release soon.